Last week, I introduced you to how I set up my channel and how it runs up against YouTube’s intellectual property management system, Content ID. I left you on a bit of a cliffhanger, with my cover of Usher and Alicia Keys’ “My Boo” getting banned in the U.S. (but available for revenue sharing everywhere else in the world). This week, I’m going to discuss how I made a “Fair Use” argument to get it back for my U.S.-based YouTube audience.

As you can see, my cover of “My Boo” is still alive and well. What witchcraft is this?! In cases like this, there is the possibility of resorting to the Fair Use doctrine. According to YouTube’s page about their Fair Use policy, there are four pillars to be considered (quoted below):

Next to every copyright claim that is made about your videos is a link to file a dispute. Upon clicking it, you are given two fields: the first is a selection box for the type of claim, and the second is a text box to write out your claim. The most effective claims simply check off as many of those four bullet points as possible, even quoting YouTube’s own text on the topic where possible.

Unfortunately, I did not save the text of my claim dispute, but the gist of my reasoning was based on the first and last pillars. Concerning the first, I argued that my work could be seen as transformative, imbuing the song with new meanings linked to multiculturalism, traditional art, and second-generation Asian American experience. On the last pillar, I made it clear that it was impossible for my cover to stand-in for the original or otherwise steal any revenue from it, since it was so different in so many ways (e.g. it was an instrumental track by a nobody playing an obscure Vietnamese instrument while the original was a vocal duet by freaking Usher and Alicia Keys).

My practical advice for anyone filing such a dispute is to simply refer directly to each relevant pillar from the four above and then expand upon it in a paragraph or two below. For example, I might have had a section like this in my dispute text:

**This video has VERY LITTLE OR NO EFFECT on the potential market or value of the original work.** While the original work is a vocal pop duet between two well-known artists in the public sphere, this video is an instrumental performance on an obscure Vietnamese musical instrument. As this performance can be seen clearly as an understood by audiences to be a homage to the original, it cannot possibly replace the original, and the market for the original, which relies on the fan-base of the two vocal artists, remains untouched by the niche nature of this work.

Note that I didn’t use special formatting in the body of my text, relying on asterisks and all-caps instead, because the form you are given is a simple text field. When drafting your text (which you should do in a separate editor in case your browser crashes or you accidentally close the window), keep this in mind so that you don’t waste time going back and fixing your text once you paste it into the form.

In any case, after a few weeks, the copyright-holders came around and all was right with the world again: 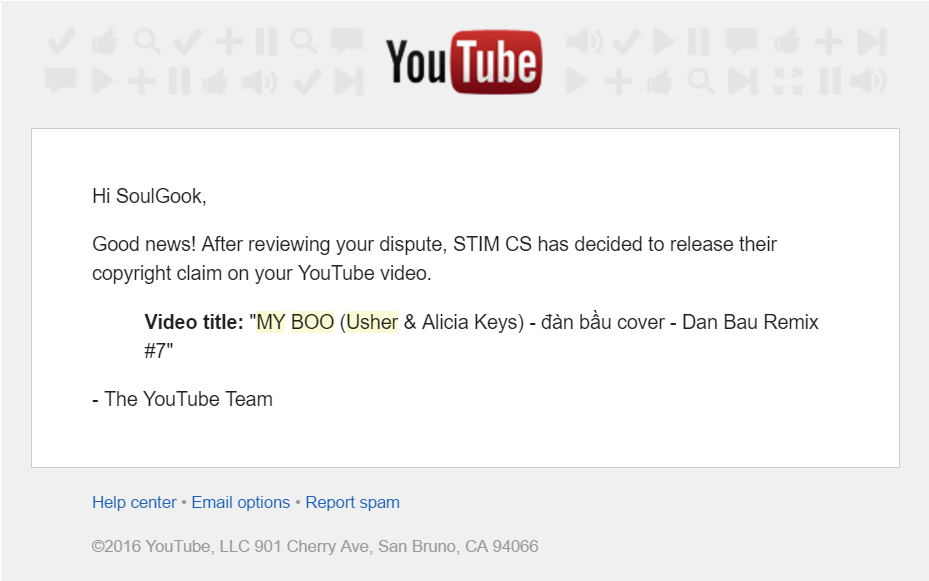 To YouTube’s credit, their policy while the dispute is being resolved is to let the video be shown and to continue monetizing it (showing ads), but they hold onto any money that is earned until the resolution of the dispute. That is probably a fairer way of handling the situation than other options I could imagine. The other party also has a 30 day window to respond, at which point you automatically win the dispute.

To date, I haven’t felt the need to resort to the Fair Use doctrine for any other song, since my main concern was simply to get my video back up, not to keep all that sweet, sweet ad revenue money to myself (to date, “My Boo” has earned a whopping $0.02). I’m not, after all, on a mission to overturn the entirety of American and international intellectual property law, and given the system we do have, I believe artists should get their fair share of what I make covering their music. On the off-chance that my cover of “My Boo” ever took off and made a ton of money, I would personally feel obligated to renegotiate something directly with the relevant stakeholders.

For now, I tend to think of the Fair Use doctrine as a tool within our existing intellectual property regimes for achieving a balance that lets people do what they have always done: take elements of the popular culture around them and refashion/remix them in new ways that speak to their own experiences. Leave me alone to do that, and I’ll be totally happy to share my 2 cents of ad revenue.

That’s it for this week’s entry in The YouTube Diaries. Please comment below if you enjoyed reading or have anything to share on the topic, and come back next week when I discuss the people who try to profit off Content ID by making opportunistic copyright claims that prey on the little guy.